Welcome to our March 2016 newsletter. In this newsletter we announce KuangChi Science Limited pre-agreed further investment, a brief overview of our Interim Financial Statements for the Half Year ended 31 December 2015 and Investor Relations information for our current and potential investors. For those of you interested in the technical side of our operations, we provide some information on our exciting new temporary test facility and our production roadmap. We’ll also be looking at the upcoming events in which Martin Jetpack will be participating.

With KCS additional funding now secured the Company is looking forward to focussing on finalising the commercialisation of the Martin Jetpack with an aim of first sales to market taking place in the latter part of 2016.

For more information on our agreement with KuangChi Science Limited please click here.

Martin Aircraft Company Limited (Martin Aircraft) (ASX:MJP) is pleased to announce the release of its Interim Financial Statements for the Half Year ended 31 December 2015.

The Directors report that the Group’s operating loss after tax for the half year ended 31 December 2015 was NZ$4.6 million. The Group’s net result was a profit of NZ$4.9 million after taking into account favorable non-cash derivative movements.

In addition to NZ$4.6 million expenditure incurred in developing and commercializing the Jetpack, a further NZ$4.3 million development expenditure has been capitalised as an intangible asset in the period to reflect that the Jetpack is in the development phase.

Our new auditors invited us to consider a different treatment of the accounts in two areas regarding the convertible bond and Hong Kong Joint Venture Share Swap. This new treatment does not impact the company, its solvency or its actual cash position - they are valuation changes only based on a combination of observable and unobservable valuation inputs required to comply with NZ GAAP accounting standards. In summary, at this time the convertible bond funding has been received, the Company has $33.4 million cash and KCS ownership has increased to 52%. The majority of the derivative non-cash accounting entries will be reversed in the period to 30 June 2016 and the Company’s equity position will return to positive.

On the 25 February Wholesale Investor in conjunction with ASX hosted Martin Aircraft Company Limited (ASX:MJP) at the Emerging Company Showcase 2016, which took place at the ASX Auditorium in Sydney. Peter Coker, Chief Executive and Managing Director of Martin Aircraft Company, presented an Investor Relations update to over 200 shareholders and potential investors. 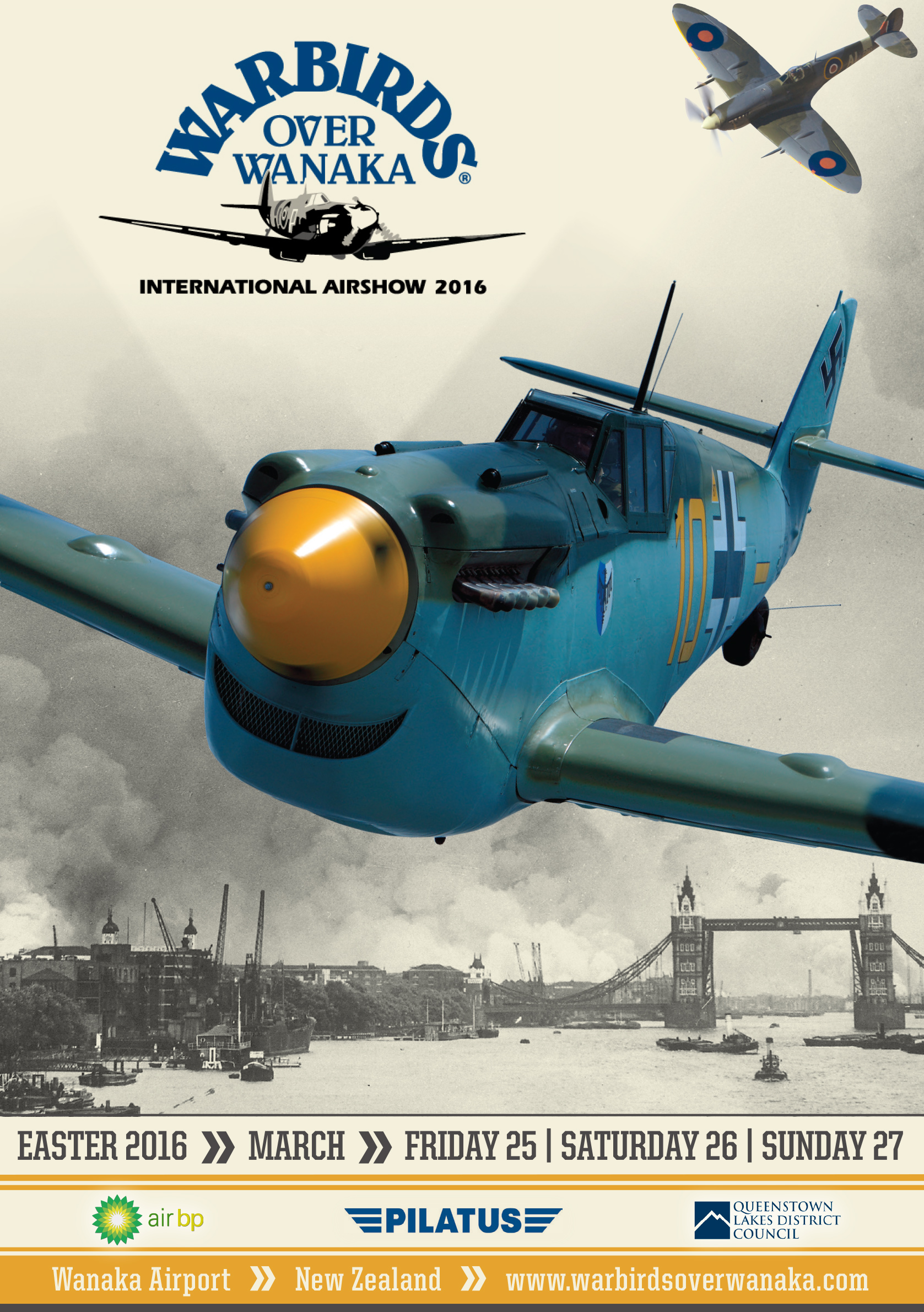 With less than a month to go before this year’s Warbirds over Wanaka International Airshow the team at Martin Aircraft Company have been busy planning for this iconic event in New Zealand’s South Island.

Every two years over 65,000 people make their way to Wanaka for what is now considered the largest warbird airshow in the Southern Hemisphere. While not a trade show in the traditional sense and therefore no sales expected, Warbirds over Wanaka does provide an ideal location to demonstrate the flight capabilities and potential practical applications of the Jetpack to dedicated followers and future Jetpack pilots in the community. At this show Martin Aircraft Company will be planning to demonstrate the unmanned capability of the aircraft.

Says Chief Executive Officer and Managing Director of Martin Aircraft Company, Peter Coker, “Since the beginning the Martin Jetpack has had a core group of loyal followers in New Zealand and increasingly internationally. Warbirds over Wanaka represents an opportunity for us to show our appreciation for this support and share with all aviation enthusiasts and their families that the Martin Jetpack dream has now become a reality.”

Martin Aircraft Company is pleased to announce that in collaboration with its Indian Alliance Partner M2K Technologies it will be attending the Defexpo 2016 show in Goa, India, from the 28th to 31 March. Defexpo India takes place every two years and the 2016 show is the ninth in the series of Land, Naval and Internal Homeland Security Systems Exhibitions. To date almost 900 companies from 44 countries have registered to attend.

India is the world’s second most populous country with more than 1.25 billion residents. There are more than 50 urban areas holding populations of more than 1 million, and in cities such as Mumbai the population density can be as high as 21,000 people per square kilometre. There are also large areas of the country and coastline subject to extreme weather conditions such as flooding and cyclones. This is where the Martin Jetpack can play a large role in saving human lives.

With its ability to take off and land vertically and to operate in confined spaces such as narrow streets and village squares, the Martin Jetpack is the ideal vehicle to respond to emergency situations in ultra-high dense urban environments where motor vehicles may struggle to arrive at a scene and helicopters are unable to operate due to overhead obstructions such as wires and aerials. Furthermore, its ability to carry payloads of up to 120kgs make it ideal to participate alongside the military in search and rescue support operations in extreme conditions within cities, out in the countryside and from ships at sea.

Although it will not be flying at the event, the Martin Aircraft Company will be sending a full scale static model of the Martin Jetpack to the show so that interested parties can easily come to grips with the technical specifications of the Jetpack and its search and rescue, military, and commercial applications, both manned and unmanned.

The M2K Technologies stand will be located in Hall 10 Stand Number 10.3.6

Further information on Defexpo 2016 can be found at https://www.defexpoindia.in/ 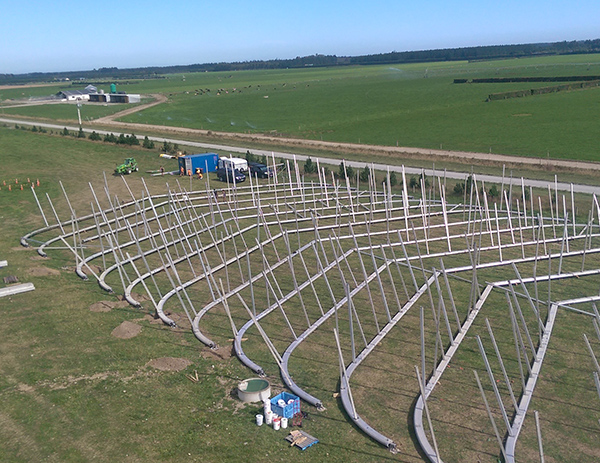 It may look like simply a large tent to passers-by, but Martin Aircraft Company’s new temporary Flight Test facility at Oxford forms a critical part of the flight-testing process as we move towards the final design and production of our Next Generation Jetpacks.

Constructed from aluminium beams professionally installed and surrounded by canvas tensioned by machine, the 15 metre high, 40 metre wide and 80 metre long light-weight structure is firmly anchored by 1.6 metre pegs driven into the ground. This makes it suitable for use in all types of weather, including rain, strong winds and even snow.

Explains Mike Read, VP Flight Operations for Martin Aircraft Company, “When a new type of aircraft is introduced or a new version of an aircraft comes off the production line, it is critical to get the most accurate data possible during testing. This new facility will enable us to test the aircraft in conditions with no wind, which ensures more precise information is captured from each flight”.

The Design Engineering department at Martin Aircraft has achieved a number of significant milestones recently that have ensured that the Martin Jetpack will be ready for commercialisation later this year. 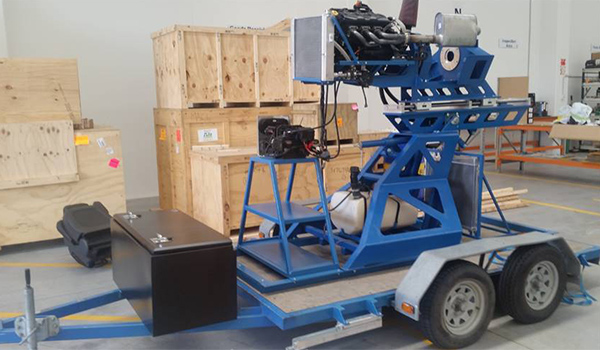 A core team of analysts have joined Martin Aircraft and the company has leased some floating software licenses, enabling aircraft-standard analysis to be performed to achieve a more robust optimisation of the aircraft. At the same time, an additional set of licences has been leased to enable more detailed aerodynamic analysis (Computational Fluid Dynamics, CFD) to be performed. A full aircraft model is in the process of being built and will be coupled with flight tests. This is key in optimising the duct performance, understanding the flow of air around the aircraft, maximising the capability and performance of the cooling system and understanding in detail the control vane configuration.

Martin Aircraft has also acquired two new Thrust Rigs as part of its testing equipment. One of the Thrust Rigs has been sent to our partner engine company in the UK, which will perform the first integrated tests of the new engine and drive train, while the other is on site at Martin Aircraft for in-house testing. Says VP Design Engineering Simon Topping, “The purchase of the Thrust Rigs is a key step forward in understanding the actual thrust produced by the ducts and verifying the analysis work performed to date. Furthermore, the Thrust Rigs are critical to obtain a full suite of measurements to optimise the aerodynamic and structural design of the duct and vane assembly.”

The image below illustrates the base roadmap for the development of the manned (red) and unmanned (UAV) product lines. Both are based on the new Flight Control System being tested and configured on the P13 Unmanned Test Vehicle.

The purpose of P13 is to provide a platform for testing the new Flight Control System (FCS) in a controlled environment, which is planned for inclusion in the Next Generation Jetpack. It is also the stepping stone for our UAV models.

Our P14 manned vehicles have undergone a first Preliminary Design Review and have achieved a number of significant milestones in the areas of airframe, propulsion, ducts and vanes. The UAV P15 work-stream commenced post-Christmas with the mapping and understanding of potential capabilities, barriers to entry and effort required by Martin Aircraft to implement. This analysis has shaped the P15 design, with a specific focus on stability and control.

Martin Aircraft Company is delighted to announce the appointment of Simon Topping as VP Design Engineering. Simon has been acting in the role of Head of Design Engineering since mid December and takes on this newly renamed position with immediate effect. Simon brings to the role tremendous experience in the aerospace industry gained while working at Airbus Operations Ltd in the UK, first as the lead engineer for composite structures and later as systems installation lead and finally as Head of A320neo Wing Systems Installation & Flight Test Instrumentation. More recently as Programme Manager at Smiths Detection, Australia, Simon was solely responsible for managing and delivering all security screening equipment to each of the G20 events throughout Australia, including the Leaders’ Summit in Brisbane. Simon holds a MEng (Hons) in Aerospace Engineering from the University of Manchester.