This month we talk about the success we’re having with our three test rigs. We also introduce you to our Head of Aircrew and Flight Testing, give an update on P14 and production readiness, and give some feedback on our attendance at the Airborne Law Enforcement Association Expo and Bubba’s Jetpack.

The P13 Unmanned Test Vehicle (UTV) has successfully completed its first roll gain tuning test while suspended in our Gimbal test rig. The purpose of the trial was to test the aircraft response to pilot input of the roll command while the UTV was safely constrained in the test rig. After each series of test pilot inputs, our engineers tweaked the flight controls in order to further refine aircraft roll performance.

This test was important in that it not only proved the integrity of the Gimbal rig but also the basic operation of the flight control system. Test Conductor Easwaran “Iceman” Krishnaswamy explains, “If the engine is the heart of the Jetpack, then the Flight Control System is the brain. It is the intelligence that directs all movement of the Jetpack in the air.”

Martin Aircraft Company has been working on the adoption of a new Flight Control System (FCS) since the beginning of this year. Now we’ve reached a point where we can put it through its paces to see how it performs on a Jetpack in a controlled environment. Once proven, it can be installed into the P14 prototypes and eventually the Series 1 Jetpack.

The Gimbal test rig and the Tower test rig were designed and built in house and consist of numerous innovations. The test rigs form an important part of testing our new FCS. The UTV effort reduces technological and safety risk as we proceed forward to the P14 and the Series 1 aircraft. The UTV test program is scheduled to be completed over the next six weeks and consists of four main stages: 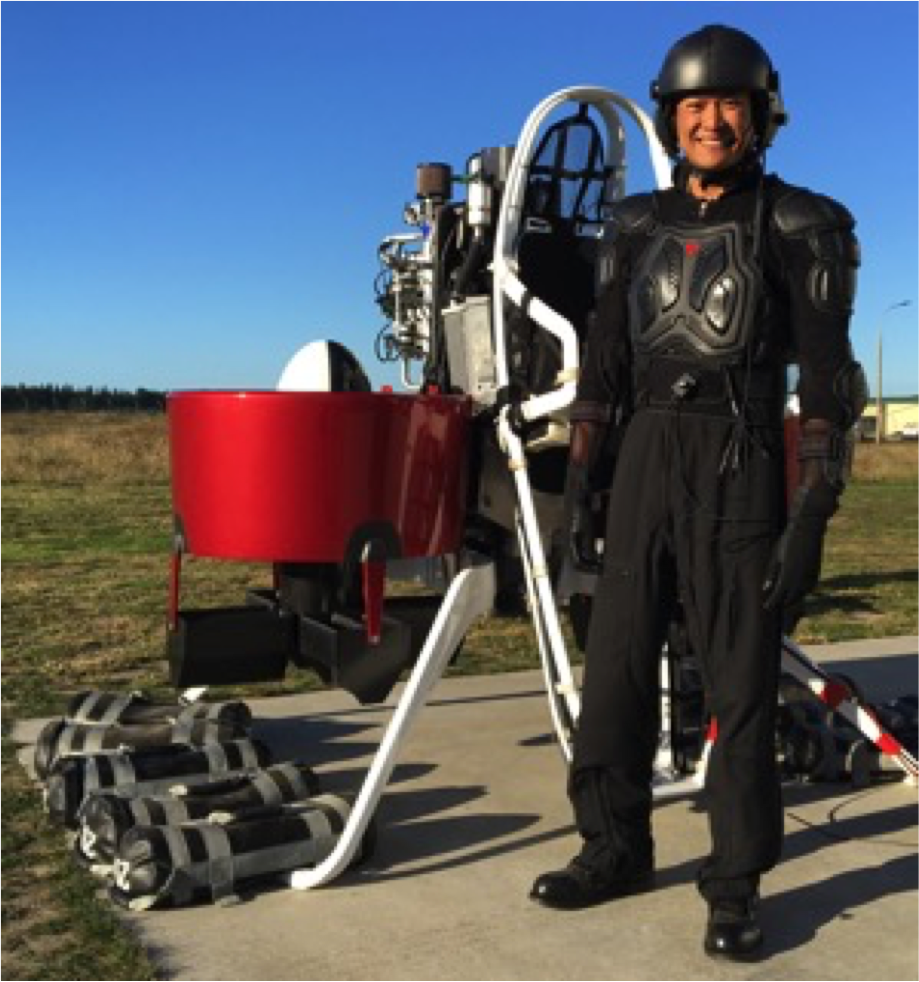 You need to be made of stern stuff take to the skies in an experimental aircraft, not to mention highly trained with outstanding knowledge of aeronautical engineering, excellent analytical skills and the ability to fly accurately. Fortunately for the Martin Aircraft Company its Head of Aircrew and Flight Testing and Chief Test Pilot for our manned aircraft, Prospero “Paco” Uybarreta, embodies all these traits.

With these impressive credentials, Paco has been signed off by the NZ CAA as a Category 1 test pilot for the Martin Jetpack, which means he is able to conduct manned flight tests of the Martin Jetpack now that it has been awarded experimental aircraft status. He is also approved to train our current team of pilots to enable them to act as test pilots for our new prototype aircraft and for this purpose he has designed a course for all current and future test pilots based on CAA requirements. This includes six hours of academic learning and ten hours of Jetpack simulator training in techniques and manoeuvres along with actual flight training.

Paco explains, “Due to the unique nature of the Jetpack, the CAA has required both fixed wing and rotary training for our potential test pilots. Currently we use the Alpha aerobatics-capable fixed wing aircraft to conduct experimental and operational flight test manoeuvres. We also using a Cabri helicopter for rotary wing flight testing, which allows us to practice movements such as hovers and pirouettes.”

As well as designing and conducting the flight training, Paco is also involved in actual flight tests involving our current prototype aircraft. These are refinement stage test rehearsals for P12, which allows flight test data to be acquired in a number of crucial areas including airspeed attitude, stick input deflections, duct aerodynamics and envelope expansion.

“Essentially we are conducting research testing for our new prototype P14 and Series 1 aircraft,” comments Paco. “We are looking at how the aircraft reacts in a number of situations, the results of which will be fed into the new aircraft design to ensure optimum performance and continued robustness of the Jetpack. 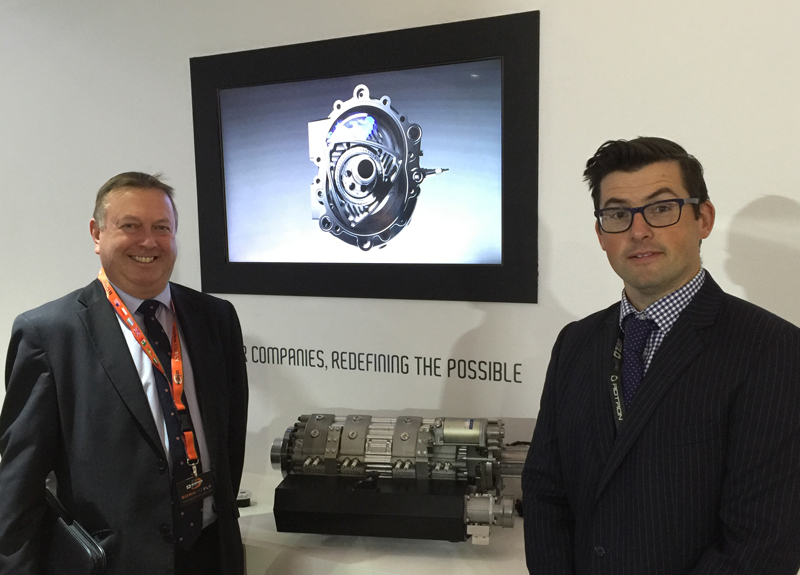 Many parts for our P14 test aircraft have been ordered and some have already arrived and been subject to our new inwards goods process and quality inspection. We continue to progress our production set up towards production readiness. Many of the processes for our submission to the CAA as a Part 148 approved manufacturing facility have been drafted and will be rolled out in the coming weeks. The P14 aircraft will define the technical capability and be the baseline for our Series 1 aircraft.

The first rotary engine has arrived safely from the UK and will be used to confirm the fitting of the various wiring looms around the engine. Our CEO and Managing Director, Peter Coker, met with Gilo Industries Group CEO Jim Edmondson at the Farnborough International Airshow recently where the engine was on display. Gilo Industries Group’s wholly owned subsidiary, Rotron Power Limited, adapted their Rotron engines that are currently being manufactured for unmanned vehicles specifically for the Martin Jetpack. It delivers a higher power-to-weight ratio when compared to any other specific engine while remaining small, lightweight and reliable with almost zero vibration. The engine continues to run on the test rig in the UK, often with Martin Aircraft personnel helping. Recently a milestone was achieved with the running of the engine in the vertical position. 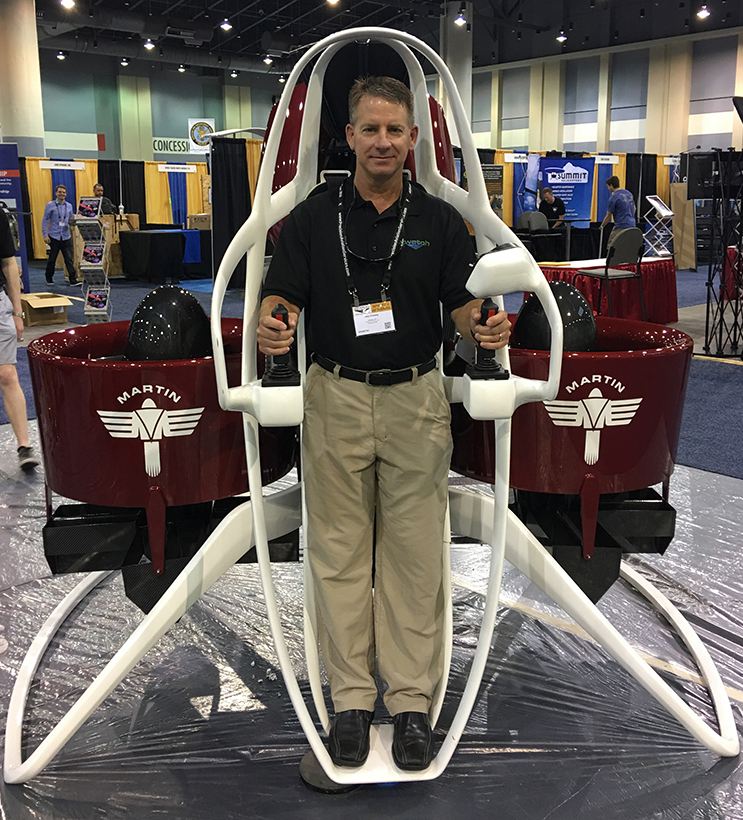 The ALEA Conference and Exhibition held in Savannah, Georgia, United States, from the 18-23 July, was an important milestone for Martin Aircraft Company, announcing both the alliance partnership with Avwatch and debuting the Martin Jetpack in the North American First Responder market.

The conference and exhibition, which is held annually, was well attended by law enforcement entities from North America and as far afield as Europe, Africa, Trinidad and Asia.

The Martin Jetpack enjoyed a prime and central position in the hall with the gleaming Jetpack Static attracting noteworthy attention, which was rapidly followed by requests for a Jetpack Experience on the simulator. The team was kept busy by keen law enforcement aviators, curious and excited to learn more.

Martin Aircraft was joined on the stand by two Avwatch representatives who provided both market sector insight and an in-depth working knowledge of key First Responder clients.

Bubba’s Jetpack, the viral video featuring two time Masters champion and currently fifth ranked golfer in the world, Bubba Watson, and starring the Martin Jetpack in the role of Golf Cart, is heading towards 30 million views worldwide across You Tube, Facebook and television.

Three years ago Bubba Watson teamed up with Oakley to create the world’s first hovercraft golf cart. With golf returning to the Olympics this year after an absence of more than a century, Bubba and Oakley wanted to take this idea to the next level and approached Martin Aircraft Company to develop the concept based on its current pre-production prototypes.

Martin Aircraft Company CEO and Managing Director, Peter Coker, comments that the company has been surprised by the number of media reports and enquiries about the Golf Cart Jetpack as a product. “Martin Aircraft Company’s current strategy is firmly focused on the First Responder market,” he confirms. “However, we have very much enjoyed being part of the Bubba’s Jetpack story and the exposure it has given us as a company has been amazing.”

If you haven’t yet watched the video, click here to view Bubba’s Jetpack.