Welcome to our June 2016 newsletter.

Welcome to our June 2016 newsletter.

This month we’re excited to announce that our prototype P12.3 and P12.4 aircraft have achieved experimental status. For our enthusiasts we’ve included a graphic on basic Jetpack assembly, excluding sub-assemblies, and we introduce two key members of our team as we move to production and delivery.

Since the announcement we have been working with the New Zealand CAA to obtain Special Category – Experimental Airworthiness Certificates for the P12 Jetpacks.

We are pleased to announce that the Experimental Airworthiness Certificates were received in May for both our P12.3 and P12.4 aircraft (registered as ZK-JMK and ZK-JML).

Says Peter Coker, CEO and Managing Director of Martin Aircraft Company, “The certificates are the result of considerable effort on the part of the Flight Operations, In-Service Support, Production and Engineering teams in collaboration with the New Zealand CAA and marks the next step on our path to commercialisation. The fact that the Jetpacks are now experimental aircraft means we are now subject to regulatory requirements that represent a higher standard of operations for the Martin Aircraft Company. For example, our test pilots are now required to pass a CAA-approved test pilot training syllabus, which we have developed, and each flight of an experimental aircraft requires the CAA to approve the purpose and test plan for the flight.”

The next steps in the certification process will see Martin Aircraft Company continue discussions with the New Zealand CAA to confirm the path that will move the Jetpack towards Restricted followed by Full Type certification as a standard category aircraft. The certification pathway, its timeline and cost is a fundamental aspect of Martin Aircraft Company’s future direction that has been in discussion for some time. Each certification step (experimental, restricted, full type) allows increasing access to different customer and market sets. Our present marketing strategy takes into consideration this approach.

It should be noted that while our approach is at present targeted at the manned Jetpack capability, Martin Aircraft Company is aware of the informal regulatory discussions taking place in many countries around more stringent certification of Unmanned Aerial Vehicles (UAVs) (or Unmanned Aerial Systems (UAS)). By keeping commonality across both the design and production processes of the manned and unmanned aircraft, we believe we will be well placed for any future regulatory changes affecting unmanned air vehicle manufacturers.

Shareholders will continue to be updated on certification progress as discussions with the New Zealand CAA mature. 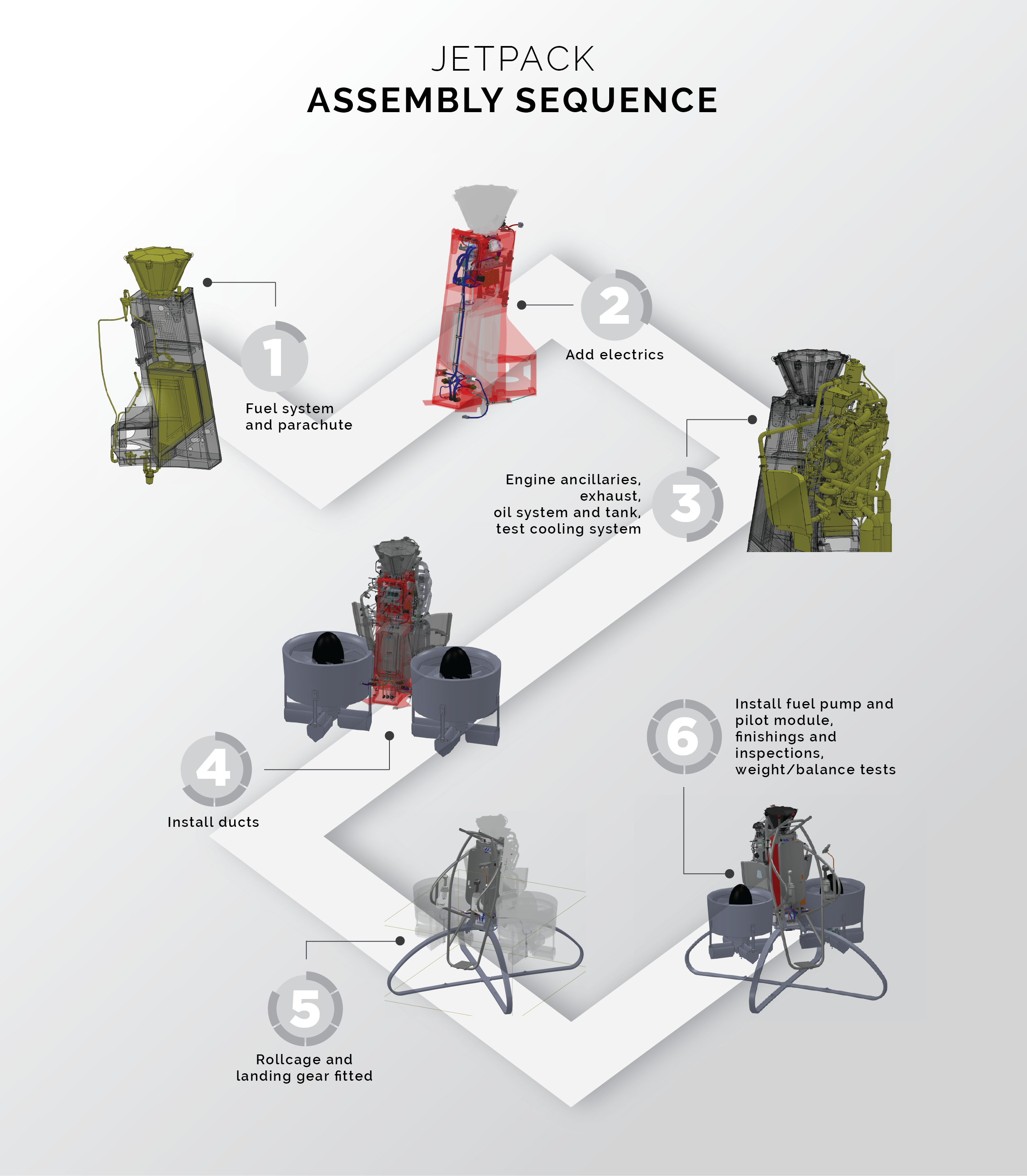 Production processes for the build of the Martin Jetpack are being finalised, which has allowed the order process for parts based on the design team drawings to commence. This is very much the start of the production process, the final part being the build delivery itself. The production schedule aligns the delivery of parts to the build requirement timeline for deliveries to our first customers expected later this year.

Strict management of the assembly process along with post-delivery maintenance and engineering support are both key to ensuring Martin Aircraft Company will consistently meet and surpass the expectations of our customers. These two important roles fall to our Head of Production, Greg Jones, and Teresa Schuster, who was recently promoted to the newly created position of Director of In-service Support.

Greg joined Martin Aircraft Company in August 2014 managing prototype builds, including supply chain development, project managing various initiatives and implementing processes and procedures to prepare for start of production. Initially from the UK, he has over thirty years’ experience as a mechanical engineer, the majority at a senior level as Manufacturing or Quality Engineer in the transportation sector. After working at Vauxhall Motors in the UK, he moved to TRW Automotive where he led a number of initiatives across the business to introduce new products and streamline product design and processes, not only at local sites but also at the company’s international locations. Following his move to New Zealand, Greg worked as Engineering Group Manager at Steelbro New Zealand where as part of the executive leadership team he was responsible for the development and management of company strategy, business plans and budgets.

Martin Aircraft Company is pleased to announce that it will be attending the US Airborne Law Enforcement Association (ALEA) Expo 2016 to be held at the Savannah International Trade & Convention Centre in Savannah, Georgia, from 20–22 July. The ALEA Expo brings together public safety pilots, tactical flight officers, administrators and technicians for a week of exceptional educational and networking events. It also offers attendees the opportunity to view the latest, cutting-edge technology for public safety aviation via its exhibition floor.

The ALEA Expo presents a great opportunity for us to present the Martin Jetpack to potential first responder customers in the US,” says CEO and Managing Director of Martin Aircraft Company, Peter Coker. “ALEA was founded to support and encourage the use of aircraft in public safety and this aligns completely with our focus on saving human lives. The expo is well known for setting the standard for excellence in the field of public safety aviation and it will give us the opportunity to showcase our product to aviation decision makers as well as end-users.” 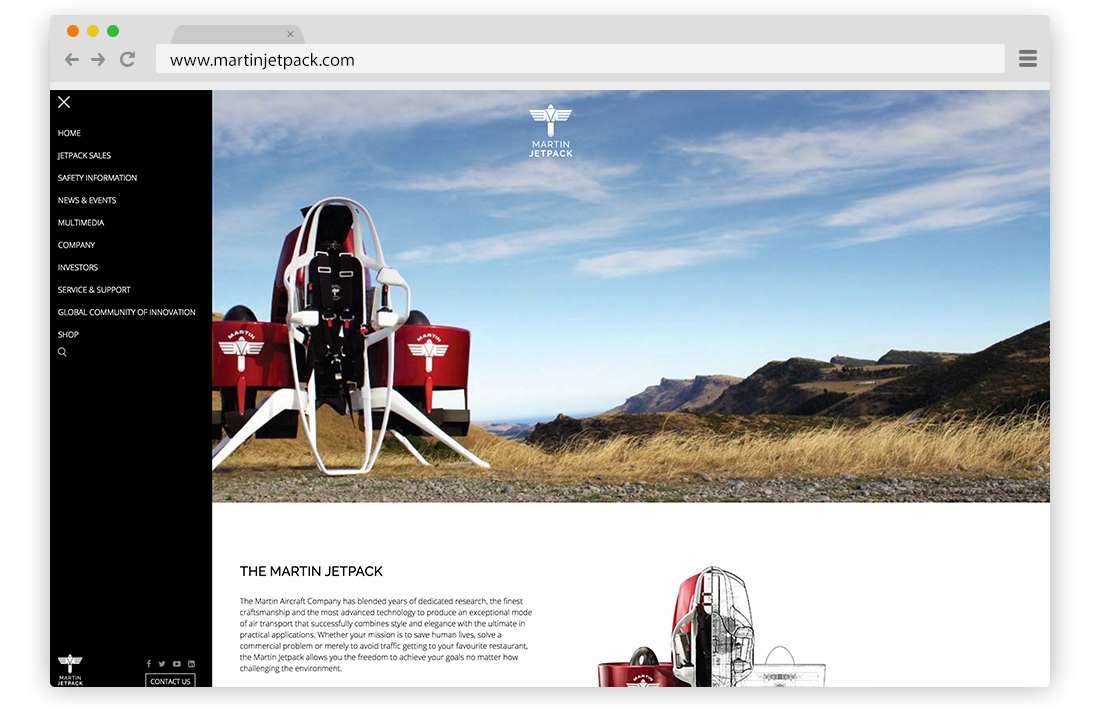 With the first of the P14 and Series 1 experimental Martin Jetpacks due to roll off the assembly line later in the year, Martin Aircraft Company has completely revamped its web site to align with the strategic direction of the business.

The new site embraces cutting edge web technologies and current trends while remaining user friendly and informative, enhancing the customer experience by allowing users to immerse themselves in the possibilities the Jetpack has to offer through video and applications.

Says CEO and Managing Director, Peter Coker, “The site has been completely reworked to reflect that we are moving from a pre-revenue company to a company that produces and sells Jetpacks. The entire site has been developed to be flexible and to expand with the company as it grows. The new web site also better reflects our brand image and target markets.”

Go to www.martinjetpack.com to view the new web site.

Our latest video release in the series takes a deeper look into the applications and operational uses for the Martin Jetpack across the First Responder, Military and Commercial markets.

Working with our Launch Customers using a Concept of Operations (CONOPS) approach we have identified a number of key areas where the Martin Jetpack will have a clear advantage over traditional VTOL aircraft. The video captures initial ideas around potential Jetpack applications for the First Responder and Commercial markets and represents a thought piece to inspire disruptive thinking as to how they can use the Jetpack within their organisations and operational environments to save human lives.

Comments Mike Tournier, VP Sales & Marketing at Martin Aircraft Company, “The video is currently done as an animated piece. Some of these scenarios are being worked into Standard Operating Procedures and training scenarios. Later this year as part of delivery we will commence operational field testing and trials. These will provide the basis for further marketing and training material, including live action scenes in future iterations of the video, as part of our planned roll out of the next series of Martin Jetpacks.”